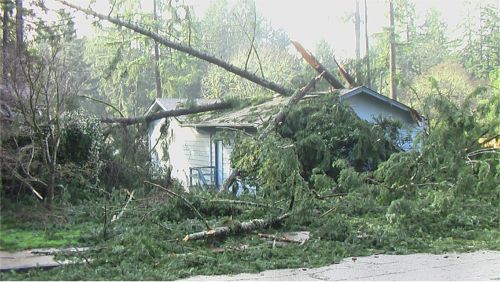 Effects of the December 2006 Western Washington Wind Storm
Dynamics of a Western Washington Wind Storm
The strongest wind storm in over a decade plowed through the Northwest in December 2006, causing widespread damage, power outages, and three deaths. Most of the damage was due to fallen trees, weakened by earlier wet weather. November 2006 was one of the wettest months ever, and the week prior to the wind storm several inches of rain fell.
The storm developed as it moved across the Pacific, reaching its full strength just offshore. Just prior to landfall, it curved northward, its center passing over Vancouver Island. But in a mid-latitude storm, the most dangerous area is not the center – it’s the area south of the center, in association with the cold front. That’s the part that passed over Washington and northern Oregon.
The earth’s atmosphere is ever trying to maintain an equilibrium of pressure, meaning that air will move from a high pressure area into a low pressure area. The movement of air from a high pressure area to a low pressure area, together with the effects of the earth’s rotation, its topographical terrain and atmospheric friction all combine to create what we commonly call “wind.”
There are two different wind patterns common in Western Washington. First, a pattern that brings strong winds to the lowlands of Western Washington and second, a pattern that brings strong easterly winds to the Cascade foothills.

The Western Washington Lowland Wind Pattern
The photo above illustrates a storm moving from the Pacific Ocean in a northeasterly direction across the tip of Washington and into southern British Columbia, Canada. This is a typical fall and wintertime storm pattern that creates wind storms in the Puget Sound and Lowlands of Western Washington.

As the storm moves into the Northwest coastal region, including Vancouver Island, strong winds from the south and southeast will rush towards the center of the low pressure storm area. The areas of Everett, Washington north to the Canadian border are most affected by this wind pattern as well as areas to the west including Port Townsend, Camano, Whidbey and San Juan islands. Curiously, the Puget Sound region remains somewhat sheltered from this wind pattern due to the fact that the Olympic mountain range serves as a barrier between the path of the wind coming out of the southeast and its storm center destination.
But when the storm moves inland and crosses the I-5 corridor running north and south, the air in the relatively higher pressure area to the south acquires a direct path to the low pressure center of the storm moving easterly across the north of the state. The winds moving north are accelerated by the topography of the local terrain. To the east of the I-5 corridor is the Cascade Mountain Range and to the west is the Olympic Mountain Range. These mountain ranges create a tunnel for winds moving north and south. As the air moving north gets "squeezed" by the mountains on both sides of Puget Sound, it accelerates.

The Cascade Wind Pattern
In the photo above, you can see a strong high pressure area in eastern Washington and a low pressure storm area off the coast of western Washington. This creates an easterly wind pattern, or wind that races from the high pressure area in the east to the low pressure area in the west. But the Cascade Mountain Range stands as a formidable barrier to these easterly winds and so they seek passage through whatever cracks in the range they can find - the passes. And as they race through these relatively narrow passages, they accelerate in speed. The cities of Enumclaw, Gold Bar, North Bend, and Cumberland, on the west side of the Cascades, feel the brunt of these winds as they escape the confines of the mountain passes.
​
Southwest Coastal Storms
When a strong winter storm system from the southwest approaches Washington, winds from the Cascade wind pattern will accelerate as the storm approaches the western shores of Washington. As the storm center continues to move north, the Cascade winds will decrease while southeasterly winds will sweep across the northwest interior (from Everett north to the Canadian border and west towards the San Juan islands). Finally, if the storm center moves inland in an easterly or northeasterly direction, the Puget Sound region will feel the brunt of winds sweeping north from the south.